Call for Papers in English 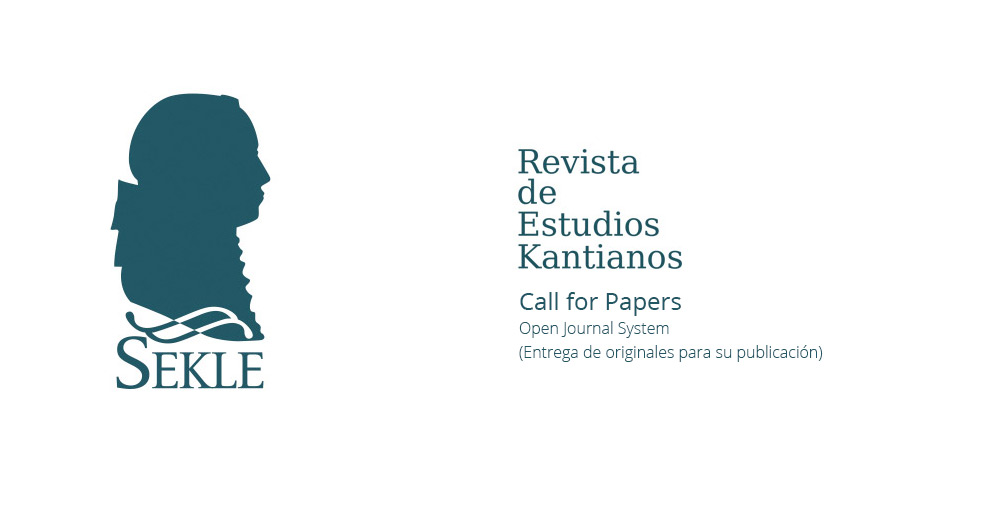 As indicated in the Articles of the Society of Kantian Studies in the Spanish Language (SEKLE), the scientific aims of the SEKLE consist of “promoting research into Kantian philosophy, on its time, precedents and influence, as well as of the topics related to Kant’s thought, his philosophical method and its possible development and contemporary appropriation” (2nd art.). These aims are equivalent to the programmatic assessment of the Revista de Estudios Kantianos (REK). REK welcomes results of high-level research in the Spanish language (as the official language of the Society of which the REK is the scientific organ), in German (as the mother tongue of Kant) and English (as lingua franca in the current global context), related to any area within Kantian studies or in an area in which their presence has a significant relevance.

The REK will particularly welcome contributions (scientific papers as well as book reviews) related to any of the following fields:

4. Philosophy of Politics and Law, History

6. Kant and other philosophers

The original works will be accepted after positive peer reviewed evaluation. Both the characteristics of the peer-review process and the norms for the authors are described in the following pages of this call for papers.

Description of the peer review-process

The only way to send contributions to REK is its digital platform, which guarantees the anonymous character of both the sending and the reviewing process and promotes its scientific objectivity.

Once the compliance of the formal items of the sending has been assessed, the area’s editor will assign the text to two reviewers who do not know the identity of the author.

The evaluation items focus on different standards of formal and material revision:

The text – of both scientific papers and book reviews – will be written in a linguistic register which is adequate to its aims and grammatically correct. An accurate and excellent use of the Spanish, German or English language will be highly appreciated.

The research of which the scientific papers are the result (a) must be original. It has to presuppose (b) not only an adequate knowledge of the Kantian philosophy, its structure and problematics, but also (c) acquaintance with the contemporary discussions on its hermeneutics and reach. The theses presented in the text will engage (d) a real progress in the interpretation of Kantian texts, in the knowledge of their historical appropriation by other authors or in the understanding of both the kind of problems Kant tried to give a response to and which were influential in the building of his thought.

With regard to the book reviews, they (a) will reflect an accurate reading of the reviewed work; (b) will give account of its argumentative structure in a schematic but sufficient way, to help the reader assimilate its content; and (c) will expose in a well-argued way the positive aspects of the book’s research as well as its gaps and weaknesses. (d) The insertion of the work in its historiographical context will be especially valued, as will indication of the potential direction for further research subsequent to the reviewed book.

The two reviewers will have a period of three months to report their evaluation to the area’s editor. Each of them will elaborate an anonymous report in which their argued opinion on the text, with regard to the evaluation items exposed in (3), will be given. In case of theoretical disagreement the area’s editor will resolve through appeal to a third reviewer, who will have three months to carry out his/her work.

In addition to the evaluation result, each author will receive from the area’s editor the reports concerning his/her text. If he/she has reasonable doubts concerning the objectivity or adequacy of the reviewer’s evaluation, he/she will notify them by submission of an explanatory report to the quality secretary. This would trigger a new internal evaluation process that could imply second peer review; its result would be unappealable.

The authors of accepted papers will have at least two weeks to review the galley proofs of the text once this has been edited.

The text will be written in Times New Roman, 12 p., single spacing. The textual quotes will appear in the text self, by referring to author and year followed by colon and page number. For example: “… so as pointed out by the British naturalist (Darwin 1871: 32)…” If considered suitable, the possibility of opening of a complementary discussion in a footnote is not excluded.

The complete references will be indicated (in alphabetic order of the name of the authors) at the end of the contribution, in a section entitled ‘Bibliography’. Should different publications of an author be edited in the same year, they will appear with subscript characters (1999a, 1999b).

The following model will be employed:

If translated texts are concerned, in the bibliography they will be indicated as follows:

Each author will corroborate accurately that all indication of identity has been excluded. In case of quotation of the author’s own publications, the reference will be replaced by the sentence “[Reference removed to guarantee anonymous review]”. He/she will take care even that the file does not include personal information within its digital properties.

This concludes the instructions for submission of papers and the description of the internal processes which contribute to high scientific quality in edition. The first issue of Revista de Estudios Kantianos will appear in 2016. It will be on a date with deep resonances in the context of the research on Immanuel Kant: February, 12th.